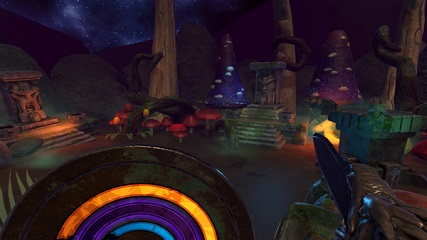 Description: Would you dare face ‘something’ way bigger than you? Would you dare become the hero the Kingdom needs? A Fungus In My Garden is a FPS where you have to fight giant ‘Seeders’ and the mutant insects they summon. You will have two magical weapons and you’ll use them to defend yourself from their attacks and to fight in melee and range. Learn the power of your weapons and take them to the limit.

Review: ‘A Fungus In My Garden’ is a first person shooter/action game in which you will be fighting some truly nasty looking bags and even the odd boss fight. To be fair to this game it looks amazing with some truly scary insects and other creatures, but the giant boss fights are the best and some of them look amazing. Most of the environments look good as well and you can find yourself drawn into the game quite easily. Sadly all the other elements of the game are not so polished.

If I have to guess I would say the developer concentrated solely on the visual elements of this game and all the rest was an afterthought. From the annoying pew, pew of your giant later gun, to the unsatisfying splat of a melee attack, it doesn’t add anything to the game. But the gameplay is where this game REALLY fails. It’s just a simple bug shooter of the likes we played on the Gear VR and Oculus Go. You block, you shoot and that is all there is to the game. Apart from the 10+ minute intro to the game, there is nothing to keep you going, nothing to hold your interest. But even the terrible gameplay pails in comparison to the game value for money. You can easily finish this game within an hour (if you can endure the monotonous gameplay for that long) and that leaves you wondering where your £19.49 went! Sure, you can play at different difficulties, but I promise you definitely won’t want to. This game could have been a fun shooter for a small price, but at the moment there is almost nothing here to make me want to recommend it which is a shame given how much effort was put into the game’s visuals.