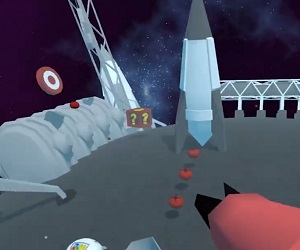 Description: Help Dot the pig roll away from the evil wolf chef, thus ruining his dinner plans. With the help of his father and his brother, you will guide Dot to his beloved Princess Rune. – Discover crazy worlds: throughout the escape Dot will encounter various environments, from forests, snow mountains to sci-fi and even maybe a little trip to other worlds. Who knows. Maybe he’s an astronaut pig. Maybe he’s a super pig that can fly. – Conquer your skills: unlock a variety of power-ups to help Dot throughout his escape, as well as discover new outfits for him to wear that give him extra special bonuses when he wears them. Roll, Jump, shoot and dodge. That’s the way the pig goes. You can upgrade your power-ups in the game using the tomato currency. The more tomatoes you collect while you play, the more you can upgrade your power-ups as well as unlock new outfits for Dot! – Show off your dance moves: You have trotters instead of your hands! Isn’t that a good enough reason to dance?

Review: Just when you thought VR games were sometimes a little weird, along comes ‘Bacon Roll’ to dive even further into those weird depths. Its so many things at once! It’s an endless runner, a shooter, a giant sim all rolled into one! Sadly this does mean that the game is hard to get used to, but after just a few goes I was rolling bacon all over the place. With its nice colourful graphics and challenging chaotic gameplay this game more than delivers its value for money, In fact…I might even go so far as to say I would have paid a bit more and still been happy with it! Some people might find it a little too chaotic or slow moving, but once I got used to it I started to have loads of fun with it. If you need a fun game to pass a few hours with, this game will do just that.