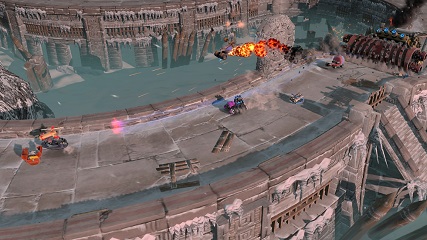 Description: BlazeRush: Star Track is a dynamic arcade survival racing game in a new space-themed setting. In this game, everyone can assemble a team of friends in local or online multiplayer. Choose a car to your taste and chase, blow up and cut your opponents off — welcome to the world of racing and frantic fun!

Review: I’ve said it before and I say it again now, ‘BlazeRush’ is one of the most underrated games on the Steam store and there are still plenty of online players to battle against in that race to the finish line. But here we are 8 years later with ‘BlazeRush: Star Track’. To be fair to the developers this game was already pretty polished and easily offered value for money and while they do say there is a new campaign that includes 30 missions, the original game had tonnes of races anyway.

In terms of what is different here, it really isn’t a whole lot. You can now play up to 8 players online and there are a few new powerups to collect, but apart from those, the rest isn’t worth mentioning. But that is not really a bad thing because I loved the original game. It’s just if you do own the original I really don’t see the point in forking out another £10.99 just for the small upgrades you get, but if you don’t own the original this is an absolute must. I just wish it had full gamepad support.