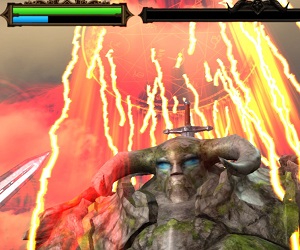 Description: Since the beginning of primitive era, human and colossus lived together. As the guardian of human, colossus helped mankind to resist the invasion and attack from natural disasters, flood, beasts and dark monsters. With the improvement of natural conditions, human race grew stronger. Once as the guardian, colossus now has become the obstruction of human’s development because of their excessive consumption of natural resources. Human race wants to develop, colossus must be killed.

Review: Children of Colossus is just one of those games that you will either love or hate. If you enjoy games like Shadow of the Colossus on the PS2 or indeed any of the Colossus range of action-adventure games this version will make you very happy indeed. While some of the scenery can be a little basic in looks the Colossus themselves do look awesome and their large scale in VR makes them feel a lot scarier than you might imagine. Sadly this game is incredibly short and most people will finish it in under 30 mins, also the voice acting is pretty appealing and the Oculus Go Controller integration is not perfect. But at the end of the day, it doesn’t cost much and is the perfect showcase for VR’s perception of size, especially with the clarity of the Oculus Go. Sure. it’s not much of a game, more an idea for a game it is pretty awesome idea at that.