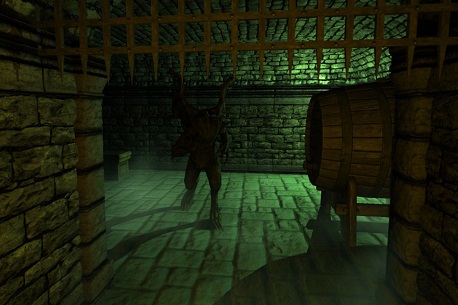 Description: You are trapped deep inside a massive dungeon. Explore it, survive it, and find a way to escape. Your only weapons will be stealth, your own courage, and a faint light. Inspired by the survival horror and roguelike genres, Dreadhalls has been terrorizing people ever since its debut at the Oculus + Indiecade VR Jam. Dreadhalls is an intense and scary experience, not for the faint of heart. You have been warned!

Review: Having played Dreadhalls on the Oculus Rift a few years ago now I have to admit that at the time I wasn’t all that impressed with it. I found the movement far too nauseous and the graphics below par, compared to many other AAA Horror games running on the Rift Dreadhalls wasn’t anywhere near the same league as them. But move forward a few years and here we are running on the Oculus Go and keeping in mind the limitations of the Oculus Go Dreadhalls looks pretty great indeed! Sure, some of the monsters are a little crappy, but the “halls” the creepy sounds all help to make this free-roaming horror game something extra special. I have to say the price is also just about right. I wouldn’t say you get amazing value for money, but it does justify its asking price quite easily. If you happen to be looking for a good VR horror game on the Oculus Go you can do far worse than choose Dreadhalls