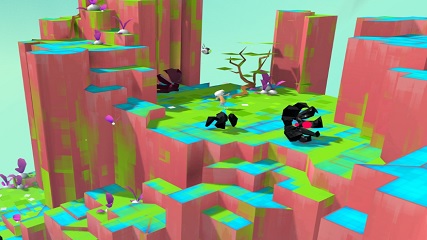 Description: House of Secrets presents a VR puzzle platformer game with combat elements that will have the player traverse the remnants of an ancient civilization on a distant planet. Throughout your journey through alien landscapes, a story will unfold.

The game holds an abstract aesthetic that has become characteristic for the studio through their earlier VR experiences such as APEX and Surge. Lively colours, intuitive gameplay and interesting level design set the tone for KIN, in which the player moves through the world as a mysterious, tiny girl with big hair clad in a bright dress. Defeating enemies and solving puzzles, she leaps from platform to platform, travelling through different landscapes.

Review: Whether I would like to admit it or not games of KIN’s quality and few and far between which sadly is a real shame. With some incredibly detailed characters run around tiny low graphic islands, it is one of those games you really do have to play to appreciate, but graphically it is one of the best looking 3rd person action platformers I have seen so far on the Gear VR. Choosing to make this game only playable with a Gamepad might be seen by some as a brave move, but using a Gear VR motion controller simply wouldn’t have given you the same level of control you get with a gamepad and besides, using the gamepad helps to make this game so immersive. While the £8 ($10) price tag might put some people off buying this game I am happy to report you won’t be disappointed in both game quality and gameplay length. Games this good don’t come around that often so grab it while it is here.