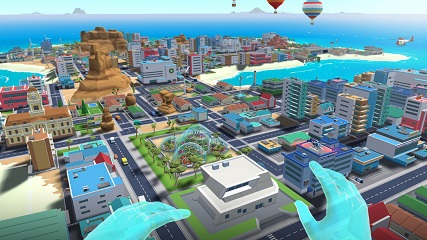 Description: Put on your headset and escape to the charming world of Little Cities, the cosy VR city building simulation game. Create your own little city and lean in to watch it come to life. See residents move in and populate your island as it grows from a humble village to a bustling metropolis. Design the layout, strategically plot amenities, and make a perfect city where your citizens love to live. Easy to pick up and play but with lots to discover, Little Cities makes your biggest creations possible!

Review: Its goes without saying that ‘Little Cities’ is always going to be compared to ‘Cities VR’ and they are very much the same game genre, but oddly different games. What I love most about ‘Little Cities’ is the simplicity of the gameplay. You build houses and other things, you earn money, you grow and you build again. It’s a simple, but gratifying gameplay loop that can suck you in for hours on end, especially with its soft colour cartoon graphics, it’s oddly relaxing given how much you have to look after and think about.

When compared to ‘Cities VR’ this is a much more relaxed game and one that doesn’t require a lot of thinking. ‘Cities VR’ has more depth, more options and more diversity than this game, but it is a lot more expensive. I just think this game is more fun mostly due to the easy-going gameplay, but I get some people will want a game with a lot more depth and if that is the case go for ‘Cities VR’ instead. I am a big fan of this type of game anyway and while I really loved playing ‘Cities VR’ I think I enjoy playing this a little bit more.