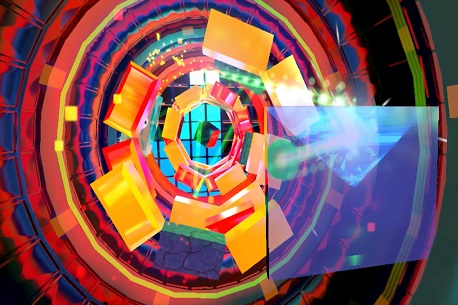 Description: Get ready for classic 90s arcade brick-breaking action from a whole new perspective! Now featuring enhanced visuals, sounds and unlockable goodies. This is the definitive version of Proton Pulse, Proton Pulse Plus!

The entity known as M.O.A.I. has attacked, and the fate of the world is in your hands! You have been chosen to compete in the most diabolical game of atomic paddleball ever to grace the 3rd dimension. Use your paddle to direct the Proton, an energy ball with awesome power and the only thing that can destroy the M.O.A.I. core! If the action gets too fast, use the Space-Time Dilator to turn a sure miss into a deadly volley! Will you be able to conquer over 50 levels and beat M.O.A.I. at his own game

Review: Personally, I feel Proton Pulse Plus isn’t the best use of VR and it sure doesn’t have the best of graphics. But what it does have is a truckload of gameplay and a large covering of retro gaming nostalgia goodness. I have to say the Oculus Go version is one of the best versions of this game I have played. Its cleaner in terms of graphics, faster on the response and altogether it looks and feels a lot more polished than other versions. While some might say it doesn’t justify its asking price, I feel it just about does…but only just.