It wasn’t until March 1989 that the very first demonstration of a full PC-VR system was shown. While most of the demonstrations were of Auto desk Cad drawing there were a few games and other experiences that started to really show off the possibilities of VR. One of those demos was a virtual bicycle ride that used a stationary exercise bike as an input device. In fact, just a few years later Sega released an arcade game called “Prop Cycle” which was very much the same thing only with much more colourful graphics. I am sure it was just a coincidence that the game’s developer attended one of these demonstrations of the VR system. VR gaming was in its infancy and it wasn’t until Pat Gelband come along that VR gaming could mature into the biggest flop of the 1990s. 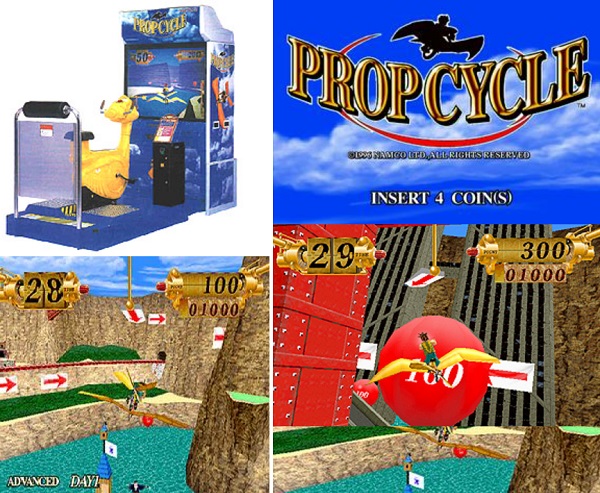 Pat used her background in physics to develop the first virtual reality sports game which was a simulation of racquetball. This was to be the worlds first VR game with a score and at the time it was groundbreaking. Holding a specially modified racquet and wearing a PC-VR headset the player swung the racquet to bounce the ball off the wall and back to the player. It was very physical especially with the weight of the headsets of that time. 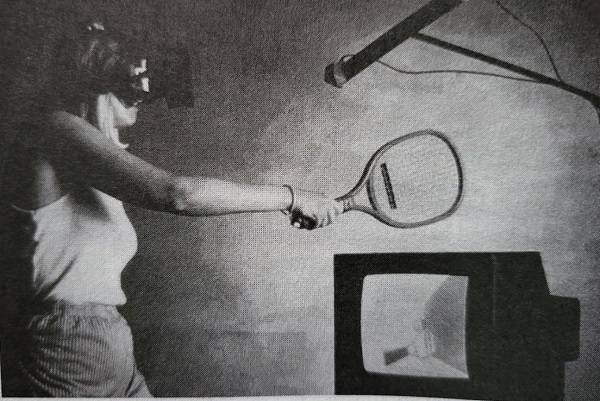 All that was missing was the shock of contact between the synthesised ball and the wooden racquet (otherwise known as haptic feedback). With further refinements, sound and haptic feedback might approximate the actual feel of hitting the ball. But it wasn’t easy to jump around left and right with the headsets at the time so Pat bent the rules slightly and programmed the ball to automatically return to the location of the racquet. This also lessened the likelihood of someone being hurt in a desperate manoeuvre to reach the ball. It also lessened the possibility of whacking an innocent onlooker. 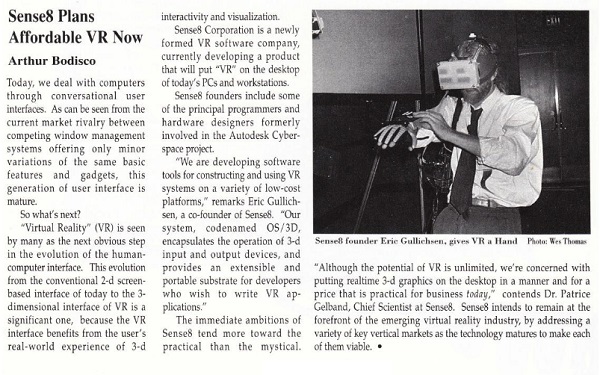 We now get into names many of us older VR enthusiasts know well and that is Sense8. Eric Gullichsen and Pat Gelband decided to form Sense8 due to being frustrated by the glacial pace of turning their research into real products, they decided to do it themselves. Gullichsen and Gelband spent 14-hour days, seven days a week, creating the core of a new object-oriented 3-D simulation language.

Starting from scratch, but retaining lessons learned at Autodesk, a tool for rapid prototyping complex 3-D simulations evolved. Driving them was a vision of a development tool that programmers could easily use to create complex virtual environments. Working out of an office in Sausalito, California, they built their first VR system out of two Amigas and two Sony Watchmans.

Gelband not only developed the advanced rendering technology at the core of the product but she also managed the practical details of running the small startup. In January of 1990, Sense8 was founded. Gelband derived the name from the adjective sensate or perceiving through the senses appropriate for their new line of work.

Showing the Amiga prototype to contacts at Sun Microsystems led to a contract and loan of workstations to port their software to the Sun system. Recognizing that Gullichsen and Gelband were onto something, Sun hoped to demonstrate technology leadership in this emerging field and counter Silicon Graphic’s lock on the 3-D graphics market.

At this time, Tom Coull joined Sense8 to handle the marketing and sales of the product. Previously a vice president in charge of Software Marketing for a Bechtel subsidiary, Coull brought valuable marketing, business, and legal experience to the new venture. Within a single year, their VR technology had successfully moved onto three dissimilar platforms.

It was at this point Sense8 had caught the eye of Intel and a wonderful partnership was about to be formed.