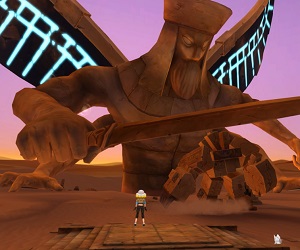 Description: Spectacular VR action adventure set in Egyptian ruins! Be on your guard in 360° angle and defeat the enemies! Battle with huge enemy bosses! Find secrets and solve gimmicks!

Review: Visually there really isn’t a lot wrong with Tomb of the Golems, in fact, I would even go a stage further and say it looks pretty good at times. But “one stage further” (of the lack of them) is what brings this game back from the brink of greatness. While it was never going to be a gold award game its high price means it only just gets a silver award. Sure, you might struggle on a few levels, but as an adult playing this I can’t see it lasting much more than an hour at most. But I am happy to suggest it for the little ones to play because it might last them a while longer. Either way, I do still suggest waiting for a sale, but if money isn’t a consideration you will find a nice game here for the younger ones.