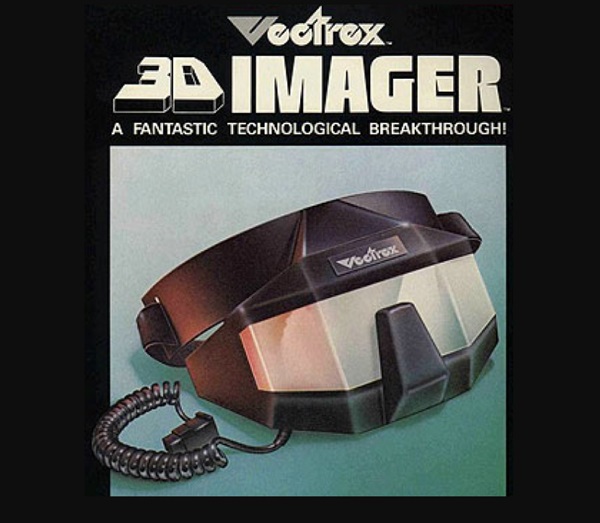 About: his was the first 3D game system to ever be released… Sega tried to claim that they were the first when they released some LCD goggles 4 years later, but were forced to pull all of their advertising due to the fact that the Vectrex 3D Imager was truly the first. The 3-D imager spins a disk which is half black and half coloured bands that radiate from the centre (usually red, green and blue) between the viewer’s eyes and the Vectrex screen. The Vectrex is synchronized to the rotation of the disk (or vice versa) and draws vectors corresponding to a particular colour and/or a particular eye. Therefore only one eye will see the Vectrex screen and its associated images (or colour) at any one time while the other will see nothing. These colour discs are delivered with the 3D games.

The 3D-Imager was only sold in the USA in early 1984 and in a small amount – literally the first in the gaming industry to have 3D. Released a full 3 to 4 years before Sega’s LCD version – who later had to pull a TV commercial claiming they were first. In Sega’s TV ads they initially advertised their goggles as being the first. The ad was pulled shortly after for obvious reasons. It wasn’t until about a dozen years later that 3D games and analogue control really took off in home consoles. Today the Vectrex 3D Imager is presumably for collectors one of the most searched items in the genre of videogames. 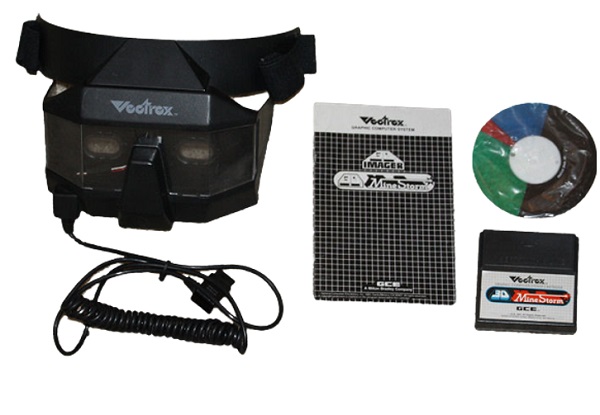 Our Thoughts: This design-led to some unique problems with the glasses. Sometimes double images were seen due to natural human focus problems. Likewise, the wheel produced a gyroscopic effect that caused the disk to want to stay put when a person wanted to turn their head. Only three games were ever released for this awesome Vectrex accessory. 3D Minestorm (which came bundled with the unit), 3D Narrow Escape and 3D Crazy Coaster.

Looking at this…toy it is no wonder people were so confused about what is and what was “Virtual Reality” in the 90s and early 90s. At least most devices we have nowadays (yes, even mobile VR devices) have most of the elements to make them cable of what we might call true VR.