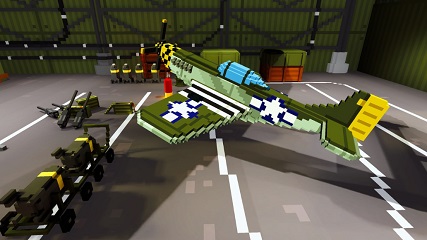 Description: Experience the thrills of the 10 most famous battles of World War 2 in this retro voxel shooter. Guide your aircraft through a hail of bullets and enemy planes, ships and tanks. Upgrade your aircraft and take on the most epic bosses such as the Yamato Battleship, the great Zeppelin, the fearsome Tiger Tank and many more!

Review: ‘Wings 1941’ is a voxel cube styled Shoot ‘Em Up in which you control a small WW2 style plane as you take on enemy forces, fly through hoops and avoid all enemy fire and other obstacles. Your plane is stuck on the end of your controller and you move your hand about, but you can do barrel rolls to make it looks cooler than it actually is. With its retro-style graphics, I didn’t think I would have much fun playing this as it reminded me of an Oculus Go game rather than a quest one.

Sure, it’s silly and the playstyle is a little retro but there is a lot of fun to be found here, especially if you plan to hit the co-op multiplayer modes. There are a few noticeable glitches here, but nothing that can’t be fixed in a small update. Sure, you don’t get a whole lot of content here, but multiplayer is where the true value is. But single players might struggle to get their money’s worth. I loved the game I really did, but I don’t rate it as highly as other reviewers. Yes, it’s fun, but it’s also a step back in terms of VR gaming.