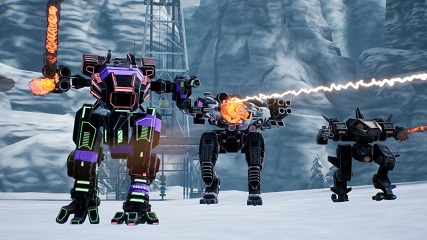 Description: Get ready for heart-pumping mech battlin’ VR action! World of Mechs is the only online competitive squad-based VR mech game that delivers the feeling of thrashing across city blocks in a 10-ton robotic war machine while launching a salvo of missiles on the opposition. Feel the adrenaline rush of leading a flanking charge with weapons ablaze and jump-jets engaged. Blast off into 20 intense missions and take down menacing bosses to become the world’s most-feared ace pilot.

Review: ‘World Of Mechs’ is pretty much what the title suggests it is. This is a single-player, or online multiplayer co-op game that sees you controlling a mech robot and taking down the enemy mech robots. There are four classes of mech and 3 weight classes for you to pick from as well as a selection of weapons to suit your own playstyle. While it isn’t as graphically beautiful as other mech games it still looks pretty good and was very simple to get into. Sadly the game is far, far from perfect.

While it sounds odd to say it, it is the lack of VR controls that really let this game down. You could just as easily play this game with a gamepad as a set of advanced motion controllers. In fact, this could just as easily be an Oculus Go or Gear VR game! I was also not impressed with the single-player content as it is just multiplayer matches against bots, so I do recommend you grab this in a sale rather than fork out full price. This isn’t a terrible game by any means, in fact, it’s quite fun. But there are FAR better mech games out there like “Vox Machinae” for you to try.