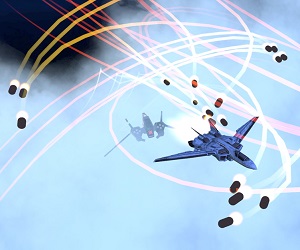 Description: It is a 360 degree VR shooting game that manipulates a deformable fighter “00-PHANTOM” and destroys enemies with weapons loaded while avoiding enemy attacks. Players will try various missions and aim to clear all stages.

Review: In the first few minutes of gameplay, I thought ‘Ace Phantom’ was going to be a gentle action shooter with some nice graphics an cool soundtrack, but certainly nothing spectacular. Then by the 2nd level the game really took it up a notch and while it was indeed only the 2nd level (or maybe 2nd missions if you want to call it that) the action was fast, furious and I was getting my money’s worth. While it has only 10 missions (including the tutorial) I still felt like I was getting my money’s worth in pure action alone. If you love games like After Burner you will love this for sure. Sadly it won’t last long enough for some people, but it will keep most people amused for a short while.