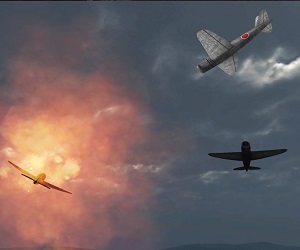 Description: Fight the enemy with your own plane in the middle of WW2. Air Combat is an air battle game built from the ground up for the Gear VR. You will enjoy controlling your own plane to fight other enemy planes in a beautiful atmosphere.

Review: While I have given Air Combat (WW2) a bronze award I still think it has some good potential. If the multiplayer is added and the controls sorted out it could be something much better. But as it is there is simply not enough content to justify download it. Sure, it doesn’t cost a lot in the first place, but with only one plane, one environment and one game mode you will soon get bored of it and certainly not play it enough to justify the asking price. But as I said, it does have potential and that might make this a game worth keeping an eye on.