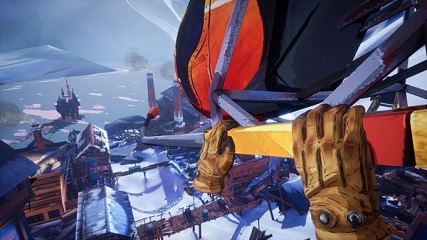 Description: Stranded in a remote mountain facility, you play as a reluctant hero forced to defend the planet in a final stand against a legion of interdimensional enemies. Take aim and run head-first into explosive action as you shoot, ski, and climb your way across an extreme adventure.

Review: If you enjoyed watching 80’s shooter films ‘Fracked’ could well be the game for you. Yes, it is your classic action shooter, but this game also borrows the drag and cover mechanic from the ‘Crisis on the Planet of the Apes VR’ While the game does look pretty good most of the time with a colourful Borderlands style to it the AI of the enemies does leave a lot to be desired. But I don’t know, the stupid AI also helps add to the fast-paced gameplay this game offers. Overall this is a game easily worth owning, but it does miss the mark as well. Maybe it is the lack of weapons or overall diversity that lets it down, but it does feel as if something is missing. Yes, it is worth the download. Yes, I do recommend it. But the game will leave you wanting more, even if there is enough content to justify the asking price.