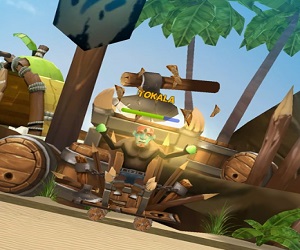 Description: You are on the island and participate in the battle of aborigine throwing fruit, and your task is to destroy the enemy. Target and send the fruit directly to the enemy. Defend yourself by destroying the opponent’s fruit and go back into battle! We have many new features for your enjoyment this time around, two new multiplayer scenarios and another refresh of the user interface. Beautiful map for single and multiplayer modes. Multiplayer for up to 4 players!

Review: While I will admit to having some fun playing Fruit War I feel it just isn’t all that playable on the Oculus Go without the Vico VR controller. Sure, you can play it, but it’s not clear on the controls with no instructions whatsoever and the single player “knockout” stages seeming broken as well, it just feels like it wasn’t meant to be played on the Oculus Go! But if you happen to have the Vico VR sensor and a few friends this game might well give you something to smile about. But without the sensor and lack of online players, this is a game that isn’t worth playing for any longer than a few minuets.