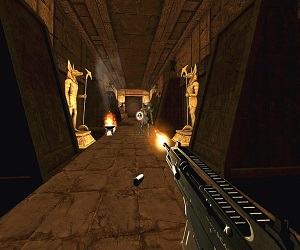 Description: Prepare yourself for the most thrilling experience in Pyramid! You will have to pick up weapons provided to shoot the mummies. They may come from anywhere, but you will never be afraid, because you are MUMMY HUNTER.

Review: While there are probably hundreds of shooters for the Oculus Go Mummy Hunter still manages to stand out as something special (and something rubbish as the same time). You don’t get way-points like many other shooters, but you don’t get control over movement either, with the game pace constantly moving through the tomb albeit slowly. There is also only two guns a pistol with unlimited ammo and no reload and an assault rifle with limited ammo. But its the shortness of the game that people will hate the most with a single (successful) playthrough taking just 15-20 minutes. But if you die at any point during that time you do start at the start again. So…thats most the bad points out of the way.

While at first, I found myself disliking the constant automatic movement through the game, towards the end I was enjoying the non-stop pace of it and the waves of enemies bursting out of just about every wall and surface that I came across. In fact, I was playing standing up (this is suggested because of the 360 gameplay) and I was starting to feel physically tired by the end of it with almost 20 mins of constant shooting action. But yet…I still don’t think it is worth the asking price due to how short it is. If you grab this for £1 ($1) or less in a sale you might feel OK with the amount of content you get, but at full-price, it’s hard to justify telling you to download it.