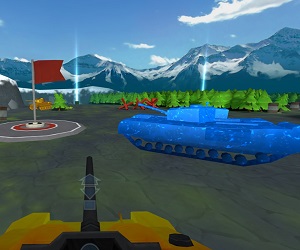 Description: The Battle is on! Face off against your friends in thrilling multiplayer panzer battles for supremacy! Defend your base against attacking tanks and destroy your enemies in breathtaking firefights. Capture the enemy flag, as you blast your way through the enemy lines. Use the various power-ups wisely to boost your abilities and turn the tide of battle!

PANZER PANIC VR is an innovative virtual reality arena game that places you behind the controls of a battle ready tank. Choose from a collection of different tanks and customize them. Challenge up to 3 friends in local multiplayer or hone your skills against a cunning AI on many action-packed maps.

Review: Sadly Panzer Panic has many, many flaws. From the sparse graphics to the overly complicated controller system. Just the fact that this game isn’t an instant pick up and play is its biggest flaw. This also shows in the lack of online players to play it with, people just find it strangely frustrating. And if those problems weren’t enough its terrible nauseating on top of it and anyone even considering playing this will need their VR legs.

But having said all that, I still think this is one of the best multiplayer games available on the Oculus Go. Sure its controls are flawed, but get a good gamepad and take the time to map those buttons in the options menu and you will soon get used to them. Sure, you will still feel nauseous, but that is just the style of game itself. Heck, even playing single player only there is more than enough unlockable content to justify its own asking price! You could play this for hours in single player mode and still have fun, but of course its the multiplayer, multi-cross-platform gameplay that this game really shines on. Provided you get lucky enough to find people playing it you will have a laugh for hours and hours. This is one of those games that is often hidden in the Oculus store, but it’s a silver nugget that is well worth digging out.