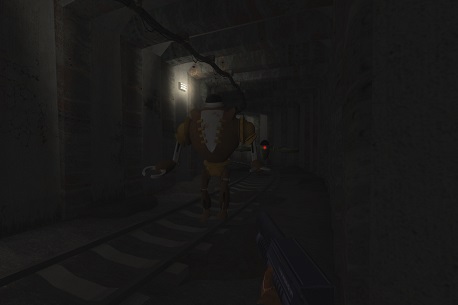 Description: A secret Soviet project started in 1958. Its goal was to create the most effective superweapon. Doctors, scientists, engineers and soldiers worked together to indite bio-robots for the Russian army. After many consecutive failures, the Central Committee closed down the project in 1969 and all the information became classified. The KGB continued the research in an underground facility without the Committee’s knowledge and in 1982 the team had some primitive results. As a CIA agent, you have to infiltrate into this facility and gather as much information as possible about the project. But it won’t be easy for you because this is one of the most guarded places in the world.

Review: While there is a point to be made about there being far too many shooters for VR as a whole the good ones are still a lot of fun to play. I am pleased to tell you Metro-2: Project Kollie is one of the good ones! This dark, zombie shooter (that later features robots) is not the easiest of games and each level featuring several sections that are hard to finish, in fact, it took me almost an hour just to get past the first one! Sadly it is the lack of a save feature that lets this game down a lot, only saving after each whole level is done means you will be replaying the same levels over and over again.

While it does get repetitive fast it has some good features like the executions and some good weapons that keep the game fresh as well as some interesting environments that will also keep your interest…if you make it that far. While I do feel it is a little overpriced I still think this is a much over-looked game that is well worth a download for zombie shooter fans. Sure, it’s not perfect, but there are far worse ones out there.