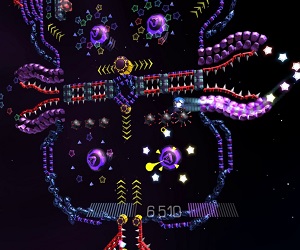 Description: StarDrone VR is a high-speed action thriller with a mix of arcade action, pinball, breakout, physics and collect-the-objects. In StarDrone , you pilot the always-in-motion spaceship through diverse cosmic environments in order to beat each of the game’s 60 levels’ goals. Goals can range from getting to the end of the level, to destroying all enemies, to collecting certain items. Each level starts by aiming and shooting yourself into the outer space from cannon. Your spaceship is always in motion from this point on, and it’s your job to attach to nearby gravity beacons to navigate your flight path. While tethered to a beacon, you can swing and attempt to circle the beacon until you release and slingshot yourself further. This core mechanic allowed us to bring together elements of shoot’em up, pinball, collecting objects and exploration in one game that has no counterpart anywhere in the world.

Review: For those who didn’t know (myself included), StarDrone has been released on many different platforms from the PS 3 & 4 to the PlayStation Vita. But here it is in VR and looking better than ever. To be honest, it’s pretty hard to put into words the type of game “StarDrone VR” is. It’s like a pinball game, with a touch of Sonic the Hedgehog and arcade classics thrown in for good measure! What you end up with is a beautiful looking game that has more than enough content to justify its asking price. While it won’t be for everyone anyone who has played the other versions of this game and enjoyed them, or anyone who loves retro gaming will love it. To put it simply this is just one of those games that its best to download yourself to see if you like it or not. It’s not that expensive so it’s well worth a try.